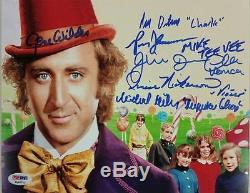 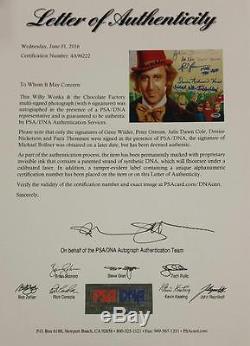 Our company (The OC Dugout) hosted a signing with the cast of the original. Charlie and the Chocolate Factory.

This photo is signed by. (Willy Wonka) along with all 5 actors who played the 5 Golden Ticket winners in the movie. Certified by PSA/DNA Item comes stickered by PSA/DNA and comes with a matching letter of authenticity. The letter pictured above is just a sample image. A PSA representative was present at the signing and authenticated each autograph on-the-spot, using.

(meaning PSA witnessed each autograph being signed). Picture is a stock image, your item will be of equal quality. Create listings that get noticed!

With Auctiva's 1,800+ Templates. The item "GENE WILDER + Willy Wonka Kids Cast x6 signed 8x10 Photo PSA/DNA COA LOA" is in sale since Friday, September 2, 2016. This item is in the category "Entertainment Memorabilia\Autographs-Original\Movies\Other Orig. The seller is "ocsportscards" and is located in Anaheim, California.