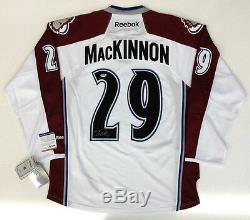 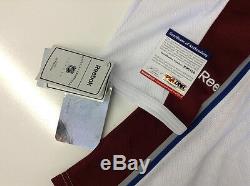 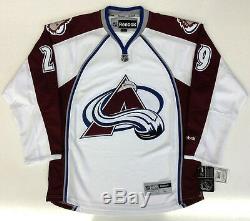 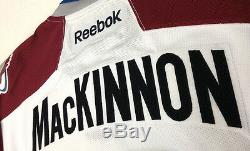 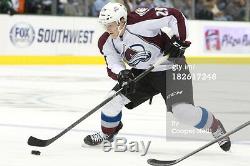 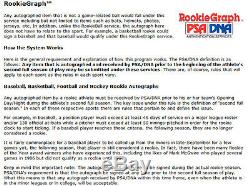 Premium Price and Liquidity Because potential buyers feel more comfortable purchasing certified items, PSA/DNA collectibles often sell for premium prices due to the strength and credibility of the PSA/DNA brand. Many of the most valuable collectibles in the world have been certified by PSA/DNA. Confidence Buyers can be confident that PSA/DNA collectibles have been witnessed or examined for authenticity by the world's leading autograph experts.

Certified for Life Because PSA/DNA uses an invisible, permanent DNA marker, the authenticity is easily verified. Verification The unique certification number can be used to verify the history of any PSA/DNA Certified item simply by typing in the serial number online. PSA/DNA's covert DNA-laced ink is extremely durable and almost impossible to replicate! The chance of duplicating our DNA strand is 1 in 33 trillion! Items with lost certificates or missing labels can be verified. We simply check for the DNA using our specially calibrated laser and issue a new label and certificate. RookieGraph Any autographed item that is not a game-related ball would fall under this service including but not limited to items such as bats, helmets, photos, jerseys, etc. In addition, unlike the RookieBall service, the autograph here does not have to relate to the sport.

For example, a basketball rookie could sign a baseball and that baseball would qualify under this RookieGraph service. Here is the general requirement and explanation of how this program works. The PSA/DNA definition is as follows: Any item that is autographed and received by PSA/DNA prior to the beginning of the athlete's second full season of play may be submitted under these services.

There are, of course, rules that will apply to each sport as the rules in each sport vary. Baseball, Basketball, Football and Hockey Rookie Autographs.

For example, in baseball, a position player must exceed at least 45 days of service on a major league roster and/or 130 official at-bats while a pitcher must exceed at least 50 innings-pitched in order for the rookie clock to start ticking. If a baseball player reaches those criteria, the following season, they are no longer considered a rookie.

It is fairly commonplace for a baseball player to be called up from the minors in late-September for a few games yet, the following season, that player is still considered a rookie. In fact, there have been many Rookie of the Year award winners who have experienced this, including the likes of Mark McGwire who played several games in 1986 but did not qualify as a rookie until 1987.

Keep in mind this important note: The autograph does not have to be signed during the actual rookie season. PSA/DNA's requirement is that the autograph be signed at any time prior to the second full season of play. What this means is that any autograph received by PSA/DNA within this time frame, even when the athlete is in the minor leagues or in college, will be acceptable.

Important Note : Remember that players who, for example, play overseas and/or in other leagues are still considered a rookie under the rules. For example, Hideki Matsui of the New York Yankees and Ichiro Suzuki of the Seattle Mariners were still considered rookies during their first full year in MLB despite having years of experience in Japan. Terms & Conditions terms text goes here. The item "NATHAN MACKINNON SIGNED COLORADO AVALANCHE JERSEY PSA/DNA RookieGraph COA" is in sale since Friday, September 14, 2018.

This item is in the category "Sports Mem, Cards & Fan Shop\Autographs-Original\Hockey-NHL\Jerseys". The seller is "locker_room_sports" and is located in Allen Park, Michigan.