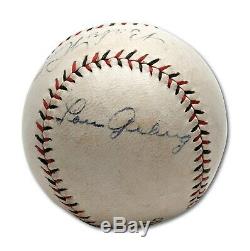 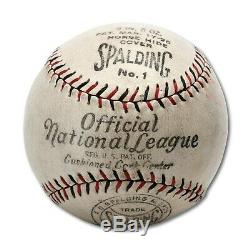 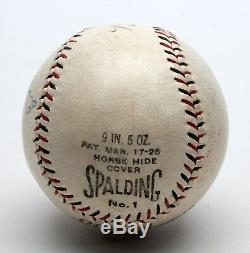 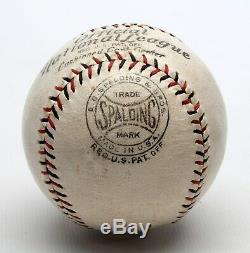 The incomparable dynamic duo of Ruth and Gehrig dominated our National Pastime at a level that will never again be seen again on a baseball diamond. For years, this unparalleled wrecking crew was the heart and soul of the famous New York Yankees "Murder's Row", unleashing havoc on a myriad of American League hurlers such to the point that they typically accumulated more home runs than virtually every single team! Their unequivocal legacy will forever transcend the game of baseball, providing its avid followers with a pinnacle benchmark of excellence. This is why it comes as no surprise that a vast number of enthusiasts scramble to obtain any possible collectible relating to either of these two baseball icons including baseball cards, magazines, programs, game used equipment and autographs, just to mention a few.

However, no Ruth/Gehrig keepsake could possibly surpass the desirability of a baseball signed by both of these baseball immortals. Imagine, the "Sultan of Swat" and "Iron Horse" both inscribing their legendary signatures on a single horsehide sphere during a period in which they ruled the game.

Just the mention of this Cooperstown worthy artifact spurs a spine-tingling sensation for any collector, and we are now proud to present one of the finest of those Babe Ruth and Lou Gehrig scripted horsehide spheres, an extraordinary circa late 1920's Official N. Heydler ball that has been graded a PSA/DNA NM/MT 8! Signed in steel-tip black fountain pen, the Babe Ruth signature situated on its customary sweet spot has been graded a PSA NM 7, with Lou Gehrig's scarcer and bolder north panel script assessed a PSA NM/MT 8.

All of the black inked stampings are bold and vivid, and as previously stated, both the critical Babe Ruth and Lou Gehrig hallowed signatures literally "jump off" the baseball. Interestingly enough, it is no secret that the Yankees demolished both the Pirates and Cardinals in the respective 1927 and 1928 Fall Classics, sweeping both of those overmatched National League squads via the "back to back" slugging tandem of Ruth and Gehrig. Therefore, it would come as no surprise if this ball was actually signed during one of those World Series contests, since the otherwise opportunity for Ruth and Gehrig to script a National League ball would not present itself often. More significantly, its remarkable visual appeal has rightfully earned the ultra-rare PSA NM/MT 8 assessment that easily places it as one of the finest Ruth/Gehrig autographed balls on the planet. Regarding the exploits of Ruth and Gehrig, their unrivaled standing in baseball history will "echo for eternity" and virtually no heirloom could possibly boast the prestige of a baseball portraying signatures for both of these Hall of Fame immortals. This is the second-highest Ruth/Gehrig ball ever evaluated by PSA/DNA. Includes a full LOA from PSA/DNA (Overall Grade NM-MT 8) and a full LOA from James Spence/JSA. We specialize in sports autographs and memorabilia. We have one of the largest selections of baseball autographs in the country. The item "The Finest Babe Ruth & Lou Gehrig Signed Baseball PSA DNA N Mint 8 & JSA COA" is in sale since Thursday, February 27, 2020. This item is in the category "Sports Mem, Cards & Fan Shop\Autographs-Original\Baseball-MLB\Balls". The seller is "showpiecessports" and is located in Deal, New Jersey. This item can be shipped to United States.